a dillydallyknitter: Who Knows What Evil Lurks....

Who Knows What Evil Lurks....

Last week CBS Sunday Morning (one of my favorite TV shows), ran a report on blogging and quoted an authority who said,

"Most of the people who read blogs -- they are highly educated. They are middle aged. And they are high income," says Carol Darr, the director of the Institute for Politics, Democracy and the Internet at George Washington University. "Cause the people who are reading blogs tend to be opinion leaders and they tend to be trendsetters. So they are influential far out of proportion to what their numbers are," Darr says.

Which perfectly describes the Knittyhead crowd I cyber hang with. And in keeping with the latest of our highly influential, trendsetting topics, I submit my entry for this week's Knittyhead blog topic: Shoot under your bed. 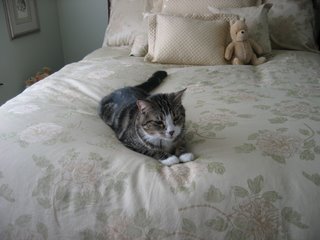 But what terror lurks beneath? 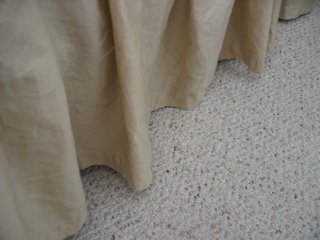 To the left we have two boxes of Christmas ornaments, a copy of the Chronicles of Narnia and a cat toy: 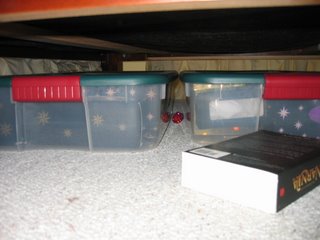 To the right, (queue Psycho music) we have: 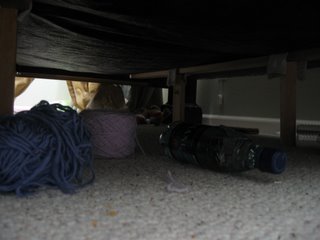 Yarn pilfered by the gangsta kitties and a Knitpicks catalog from Spring '06: 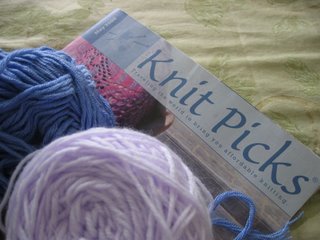 A broken sock needle, a stitch marker and HIDE YOUR EYES, a FUN FUR label!?? No wonder I've been having nightmares!! 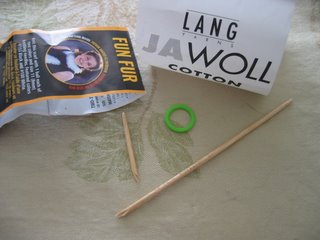 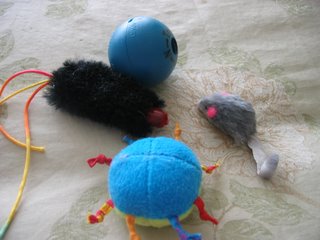 My cat, Cary, and I have this game. I like to keep a bottle of water on my nightstand in case I get thirsty. Cary thinks it's funny to knock the water bottles off my nightstand and I forget that they've rolled under the bed. (In a few years, this may be Vodka bottles): 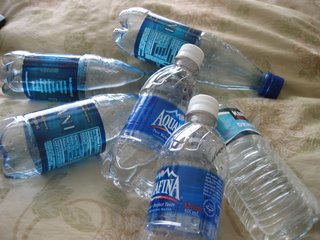 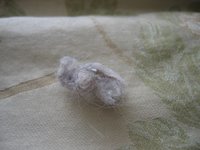 A Tupperware container stolen by Cary (because it once had kitty treats in it), a long lost cat collar, a knitted wrist warmer (wonder where the mate is), a pad of post-its with some complex (cough) knitting calculations on it, 2 hairbands and, hmm, why are my cats eating candy in bed?: 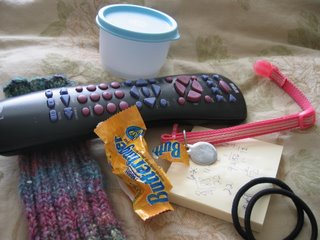 Ah much better after the 'ole Hoover's been underneath: 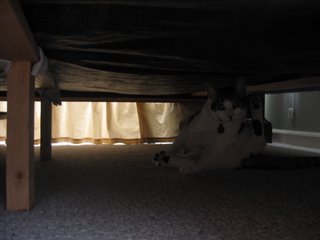 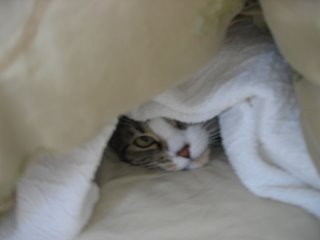 "Is that scary vacuum monster gone yet?"

The CBS story also mentioned something about "The individual 'this is what I fed my cat today' blogs". I have no idea what they're talking about.

"I hate housework. You make the beds, you wash the dishes and six months later you have to start all over again." -- Joan Rivers

"this is what I fed my cat today" blogs. Is there a problem with that?? I think not.

Those gangsta kitties are so funny! Stealing precious stash.

yep, fun fur will do it every time. things that have only touched the stuff as well. Excellent pictorial, didn't think of actually cleaning while I was down there shooting though. Humm.

Aw man! You have such a clean under the bed! And the bed was made and everything! I'm afraid of what's under my bed. Seriously afraid.

nice photo story- and you now have a clean- under the bed. time for kitty to start hoarding again!

I am so glad that someone else's cats hide things in hard-to-reach places. Even if they are GORGEOUS little monsters!

Haha! I can't stop laughing at the yarn pilferage!! Your cats are a hoot!

A hahahahahahahaha excellent. Cats stealing yarn, fun fur labels, water bottles, it's got it all! Now I need to go do mine. I nearly forgot.

I can only wish it was that clean under my bed - bits of hay, straw, and who knows maybe even some goat beans - I daren't look :)

i should thank the knittyboard for encouraging me to clean under my bed. it's been about 2 years. very brave of you to post your photos *before* the dust purge.