At the beginning of the year, LCK and I decided that this would be the year of excellent adventures of trying something new. On Saturday night we continued our quest by picking up our friend R and going to the City to watch the Bay City Bombers Roller Derby at Kezar Pavilion. 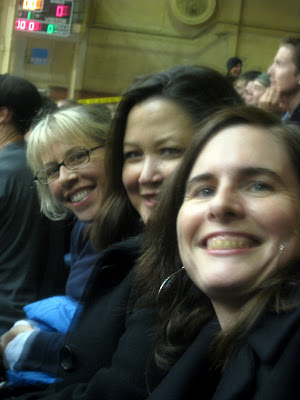 R, me and LCK waiting for the fun to begin 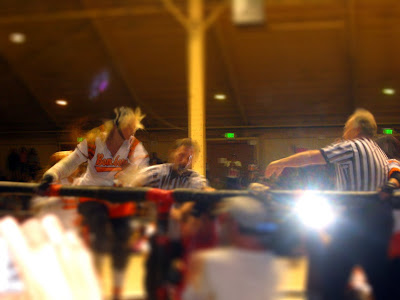 These ladies are tough 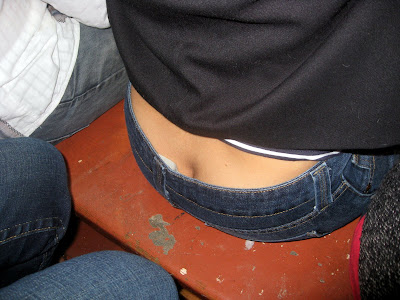 Euw! Crack! Poor LCK had this view sitting in front of her. 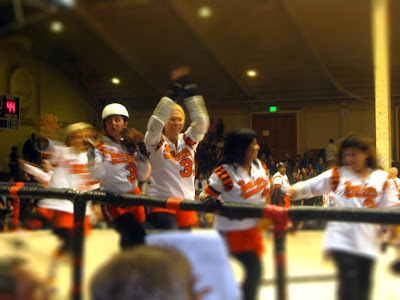 Sudden death overtime results in victory lap for the Bombers 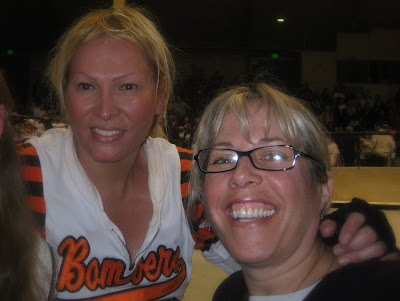 R. with a Bomber Girl 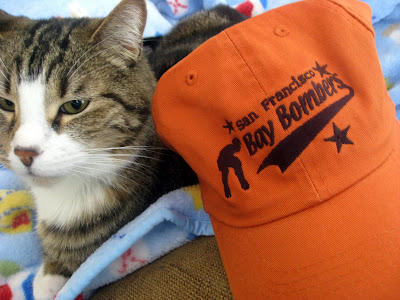 Q:Was it what you thought it would be? What was different?
A Cpurl didn’t realize it was co-ed (women skate one round and men skate one round) and it was less violent than she thought it would be. LCK thought some sort of ball was involved in the game. We both thought the crowd was great and having a great time. Neither one of us understood the rules. Cpurl also thought their uniforms would involve rhinestones, skirts and a beadazzler.

Q: How would you rate the souvenir stands?
A: Caps, t-shirts and buttons sold over fold up tables.

Kezar Pavilion was built in 1924 and has an old skool "high-school gym" look. The seats were all old wooden benches.

Q: What would be your Roller Derby name?
A: Cpurl: Purly Skates. LCK: Still thinking about it

Q: How would you rate the hot dogs/concession stands?
A: Hot dogs, aka “Derby dogs” were 4 on a scale of 10. No beer but probably a good idea in old gymnasium full of screaming fans.

Hehe...an interesting time for sure! So what's next on the agenda for Cpurl's and LCK's excellent adventures ;)

OMG! I love this adventure...who knew we had a local roller derby team!

I so want in on the next crazy adventure!

Looks like fun! Well except for the coin slot...ewww!

You know what's really sad? I instantly flashed back to the roller derby episode of Charlie's Angels. But I'm pretty sure there was a lot more hair-pulling in that one.

Fun time, interesting... view... in parts, but other than that, it looks like much fun was had all around. I don't have a sense of balance, but if I could so much as roll forward on rollerskates (and it has been tried, multiple times), I'd be tempted to join in. Alas, I'll just be watching and munching on stuff.

My derby name is Dutch Crunch. I'm seriously wanting to join. Note to self: learn to skate.