I took a couple of classes at Stitches this year. *LeftCoastKnits suggested the first one -- "Backyard Birds", a needle felting class taught by Sharon Costello. I was skeptical at first but I should have known better than to be skeptical of a class that LCK would suggest because it was SO much fun!

Here LCK is sewing the bead eyes onto my bird for me because my eyeball sewing skillz are not so great: 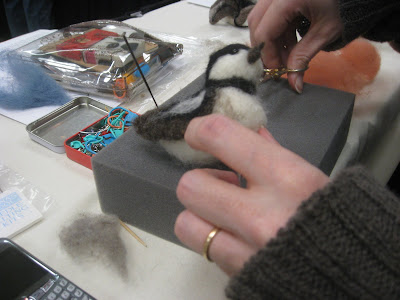 I made a chickadee (or attempted to) and LCK made an adorable Blue Bird. Christmas ornaments anyone? 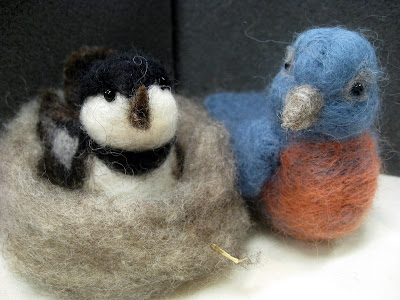 Then on Saturday we learned that:

in an all day class called "Understanding Japanese Knitting Patterns" taught by Gayle Roehm. The class was both interesting and informative and we both left feeling inspired. I'm not sure I'm ready to attempt a complicated Aran but I'd like to try something basic, like a simple cardigan or hat.

Actually, LCK didn't need the class--she was wearing a hand crochet and knit cardigan that she made out of cashmere from a Japanese knitting pattern! I was with her all day and neglected to take a decent photograph of her so will have stalk her with my camera. Here we are at the Saturday night Student Banquet. 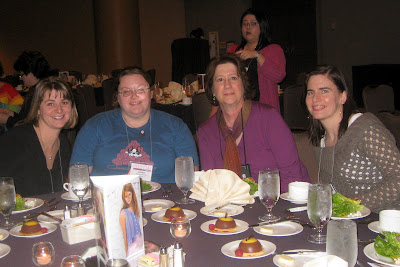 And here she is modeling it at the Student Fashion show with commentary by the colorful and flamboyant Rick Mondragon, editor of Knitters magazine:

Since it's WIP Wednesday, here's a shocker: I'm actually using yarn I acquired at Stitches to make a sweater. The pattern has become so ubiquitous that I won't even mention the name but there were many pretty versions at Stitches, including Irishgirlieknits. Josie and Knitpsycho and Beadknit are going to make one too.

Below is the gauge swatch in Blue Moon Fiber Arts, Socks That Rock Heavyweight in the Jasper colorway: 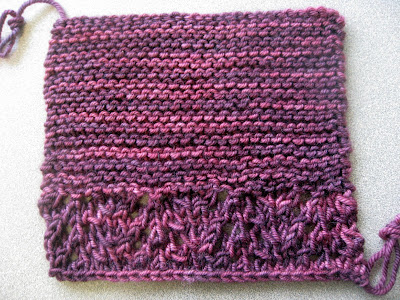 I just love those birds -- they are so, so cute. Perfect for ornaments. You did a great job.

You picked a great colorway for your FLS! Be sure to hang that swatch! God knows mine grew with gravity!

LOVE the birdies. Too cute :0)

And the Jasper is gorgeous for your new sweater ;0)

Those birdies are adorable!

And I love the color you are using for your FLS - can't wait to see it completed!

Now I wanna learn needle felting, I love the birds

oh, do I know who I want to get a bird ornament for!! Unfortunately, yours are so cute she might actually LIKE them, damn it. Can you maybe add some real feather accents, maybe we can go pigeon watching soon....

i am DYING to cast on my Stitches yarn, even for just a gauge swatch. so jealous. your birds were so cute! :)

Love those birds! How cute!! And totally great idea for christmas ornaments!

Yay for a FLS!!! Jasper is one of my favorite colorways!!!!!

Wow -- the swatch looks so pretty! I am ITCHING to cast on something from Stitches -- as soon as I finish some of these WIPs, then I can. I keep telling myself that...

What cute little birdies! Love that yours is singing! (Chirping?)

The bird(s) are in fact very cute, but the Japanese knitting stuff is a GREAT idea. I wish someone would write a book about it -- I see those patterns and just drool.

Looks like you had a great time. I'm so sorry I missed you. Next year!1

I love the little birds! They will make perfect ornaments.

The sweater swater looks good too; I love your color choice.

Those birds are amazing!! I should make one for my inlaws.

I just remembered I hate them.

Love the birds!! Cool for LCK modeling her sweater! Jasper is going to make you an awesome FLS!

Those birds are PERFECT ornaments! So cute!