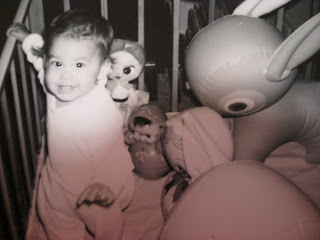 8 months old and surrounded by rather large round eyed toys

Not to be left out, here is Cary at about 10 months old. He was adopted by me from a local animal shelter after being rescued from death row from a pound out in the central valley. He was very shy and hid under the bed for several days before he'd come out and sit with me. The shelter thought he'd be better off as an only kitty. 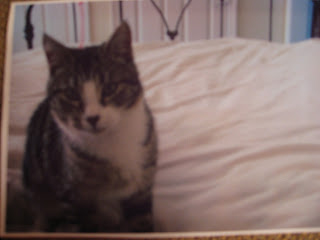 And here is Mika about about 5 months old. She was adopted from an even more local Animal rescue and was the last cat in her litter to be picked. 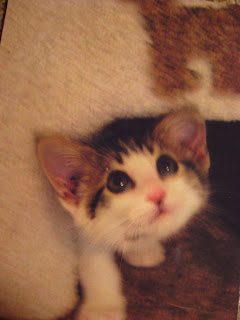 Now they sleep on my down comforter, eat off porcelain dishes and steal cash out of my purse.

This has nothing to do with old photos, but a few weeks ago I was out with Muggle friends K & J and, I swear this is true, a happy face appeared in our pizza: 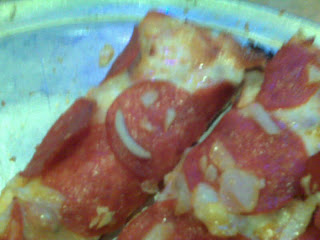 The bug-eyed monsters are trying to get the cutie baby!!!

Love the kitty early photos too! That just gave me an idea :)

And I tell you what, if I was a piece of pepperoni, I'd be smiling too.

You were such a cute baby!!

Okay that is SO a smile face! Glad you got a photo of it!!

You don't seem to have been at all freaked out by the toys with the ENORMOUS EYES surrounding you ;) Cute photo.

Love the kittie pics too. Such lucky kits to have got such a wonderful second chance with you.

The 70s baby pictures strike again - I love how you have a huge blow-up animal in your crib!

Too cute! But holy cow, that big-eyed Bambi is huge! I'dve been tempted to try and pop it. ;)

Hey, you should've tried to sell your happy face pizza on eBay. You just know some 70s flashback stoner would've snapped it up!

Hey - those pictures are darling!

I agree sell that pizza on ebay and get you some extra yarn money!

I'd sell the pizza but I ate him.

I love all of those pictures, although I'm a little scared of the "rather large round eyed toys"! And how wonderful to include early pictures of Mika and Cary!

It's like my peanut butter smiley face! I love when that happens!

And you were a SUPERcute baby, Miss Thang.