a dillydallyknitter: I'm Back! (This Time for Real!)

Wow, it's been a long time since I've posted and I've been MIA from the blogging/knitty/ravelry world but I hope that more consistent blogging is a change I can belive in for '09.

LeftCoast and I decided that this will be the year of Trying New Things. Things out of our normal suburban, knitting, middle aged rut world. (If I had a huge budget and a television contract, we'd travel around north America in a vintage, stylishly renovated silver Airstream reporting from the road but I don't so blogging will have to do.)

So what better way to kickoff the year than to attend a MONSTER JAM!!! 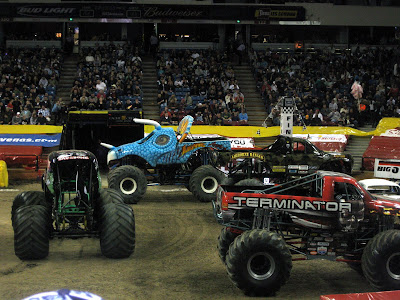 Warming up the sold out crowd! 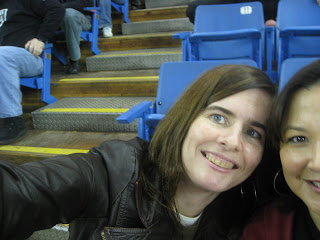 Waiting in anticipation at Arco Arena

Grave Digger vs. Jurassic Attack in a qualifying race round. Grave Digger won this race but lost out to our favorite, Airborne Ranger. The final race went to Captain's Curse. 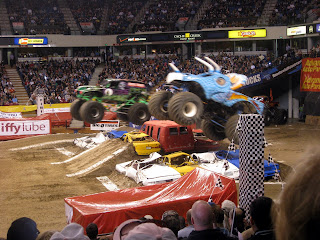 In between each event there were ATV races (California vs. Nevada): 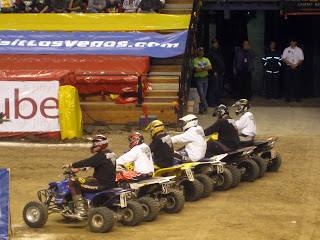 And the best part of the day: Freestyle competition-- complete with the only roll-over of the weekend! 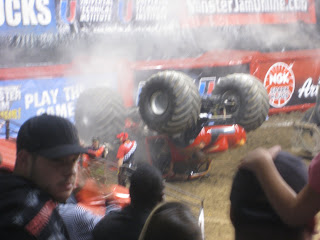 Captain's Curse rolled over but he was okay!

The perennial fan favorite, Grave Digger, almost won the Freestyle but Captain's Curse was the victor that day: 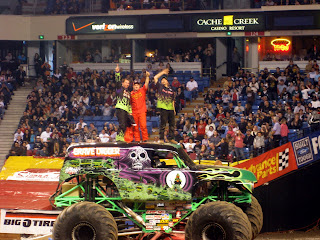 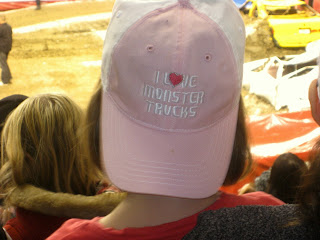 In the car ride home, we interviewed each other on the event and here were our impressions:

Q:Was it what you thought it would be? What was different?

A: The event itself was slower paced than we thought it would be, i.e., for every few seconds of "action" there's a lot of set up time for the next race/round. We both thought the trucks would race around for longer periods of time but now that we've seen how huge and complex the trucks are and how small the arena is in comparison, it makes sense that there would be lots of down time. There were a lot more children/families there than we expected. (Cpurl comment: there's a corny half time interlude featuring two car robots who fight each other in a good vs. evil duel that was totally geared towards kids)

Q: How would you rate the souvenir stands?

A: There was less of a t-shirt selection than expected and everything was over priced, as usual. (we were sad they didn't have Airborne Ranger trucks and had to settle for Grave Digger)

Q: If you had a Monster Jam truck what you call it?

A: LCK: Hell on Heels -her truck would be a giant high heel. Cpurl: I would be Python and I'd wear the super cool boots Mary J. Blige wore at the "We Are One" Presidential Inauguration celebration concert.

Q: How would you rate the hot dogs/concession stands?

A: Hot dog: 6.5 on a scale of 10. (With 10 being a Costco hot dog on the Cpurl scale.) The concessions didn't have the variety that one would expect at an Arena ( a number of specialty stands were closed) but we did have hot dogs, nachos and beer for about the same price as my monthly mortgage payment. 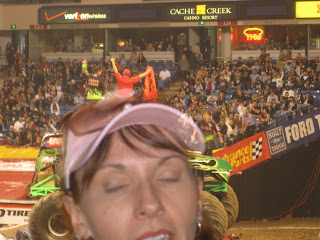 This lady stood up just as I snapped the photo so it looks like she's wearing Monster truck earrings and has little growing out of her head!

Hehe..looks like a fun time! Good for you two trying things new! AND Happy New Year, hello, miss you, hugs, and all that stuff!

welcome back! that is AWESOME! :) btw, my word verification for this post is "winess" ... I thought that was funny. lol :) I still can't believe you guys went!! :D

And here I thought you were just buried with work....glad you have been out having fun!

Dude, you are officially Redneck! Congrats!!! I'd love to take Chunky to one of these. But that six year old was killed at one earlier this month so I'm a bit leery. But what are the chances of it happening again right??

Great to see you back. What a TOTALLY fun time that event looks. I think my boys would love it.

And a great idea for doing something different. I'm going to stew on that one myself for a while.....

Glad to have you back! And I can't wait to see what your next adventure is.

It's amazing what you can find to do when you look for something fun and different! But I hope this new interest hasn't displaced knitting.

Wow. I've never been to a monster truck event. Must have been loud, but it looks like fun.

How cool that you stepped out of your comfort zone. Can't wait to see what else comes up.

I'm late getting around to my blog reading list - but I'm glad your back. Looks like the Truck Jam was fun.

I'm looking forward to working on your traveling scarf!