It's been a long week at work and I was to0 tired to make it to Knit Night, but I can prop myself up long enough to finally post my my haul from Stitches.
My very first purchase was a sweater's worth of yarn at the Black Water Abbey booth to make the Swing Coat pattern. It was like the Sisterhood of the Traveling Coat because the display model seemed to fit everyone who tried it on and it looked good on everyone who tried it on. 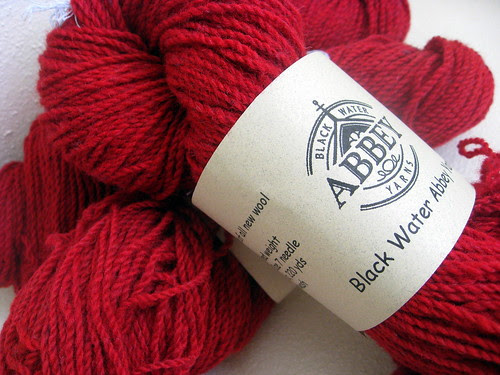 And the buttons. Because buying buttons for an actual project will mean I'll actually knit it. Actually all four of us bought yarn to make various coats and jackets so maybe they'll hold me too it. 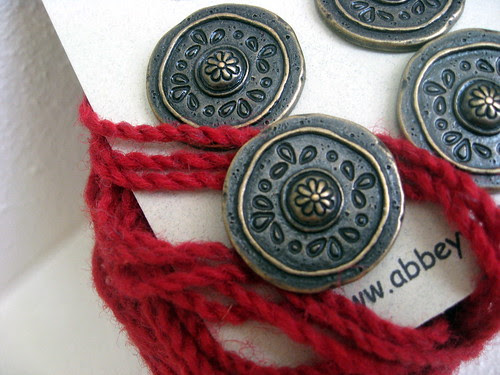 I also managed to fight the mob of crazed knitters and grab a skein of Socks That Rock heavy weight Rare Gems. 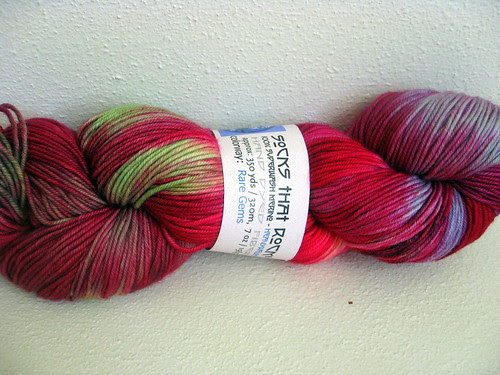 I also treated myself to Ernst glass circular needles. The seller had walked up to Josie while we were waiting for the Market to open and handed her a pair and had her take them for a test knit and we all knit a row and they were so pretty and smooth. Well that, and because LeftCoastknitter bought some and honestly, if she jumped off a cliff I probably would too.

Unfortunately, some woman snapped up the all red ones but I was happy to take these: 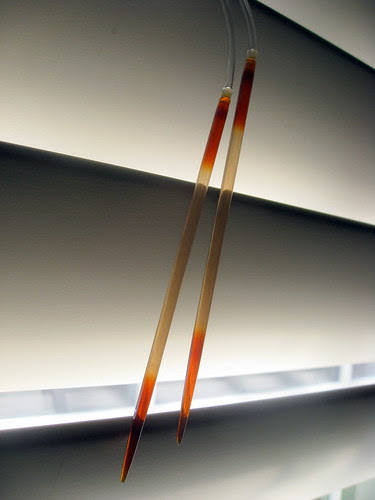 The final yarn purchase I'll blame on Josie and Knitpsycho because it's easier to do that than take responsibility for an unplanned yarn purchase. They wanted to "stop by" the Webs booth to check out the Valley Yarns. I normally don't go to the Webs booth because it's usually jammed packed and the line to purchase stuff is so long. So I wandered around while they were taking notes on the Valley yarns and looking through Nora Gaughn pattern books so I was wandering aimlessly through the aisles when I saw it and my heart stood still. 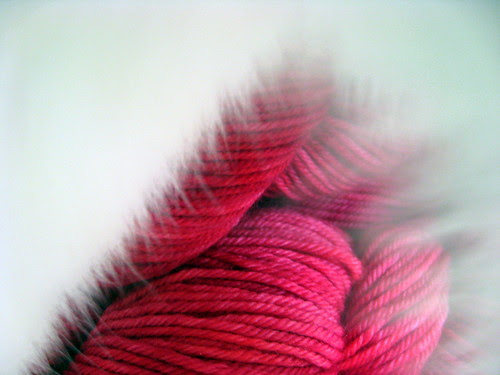 "Gee, thanks Mika, do you mind? I'm trying to photograph some yarn here."

The first time I saw madelinetosh in the wild was at the Skein lane retreat last year when I saw purlsjustwannahavefun knitting on her February Lady. It was love at first feel. I wanted to grab the sweater and run but she's so nice.

They had it in red. A whole sweaters worth and add on top the Webs discount and I weakened. 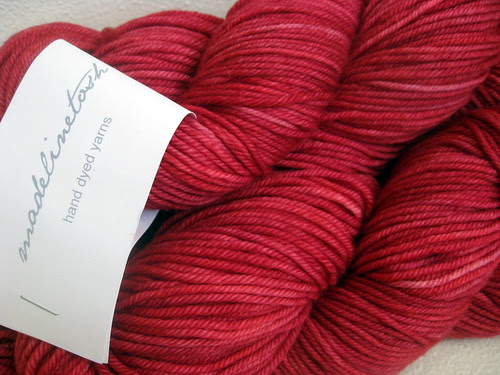 Can you blame me?

Let me guess your favourite colour......

Gorgeous yarns, one and all. Love the buttons - cute flowers in the middle :0)

And that red is fantastic!

I thought you made that photo of the Madelintosh look like that with the cloudy white fluff, kind if lie it was a dream to find this treasure, LOL

I wa sjust gonna comment on your spectacular photo skills and you mentioned Mika, LOL. I am still laughing.

NICE haul! Those buttons are cool and that MadTosh (because all the celebs have shortened names you know) looks divinely squooshy!

I have the red glass knitting needles if you want to trade. Mine are size 8s

LOVE the red yarns!!! A woman after my own heart. And those buttons are great!

There's nothing better than red -- my favorite color.

What beautiful choices. I love the red! That rare gem certainly is one isn't it? The buttons are great too.

You did get bit by the red bug! I ain't mad about it though ;op

You are going to have two gorgeous red sweaters!! Isn't that Madelinetosh worsted just devine!!! I have a sweater's worth waiting to be something special!

You are going to be the gorgeous lady in red -- with your hair! You will look great.

And I completely love your faith in buttons.

I so need to buy a sweaters worth of the MadTosh Worsted... maybe I'll copy you and get the red... we can have ANOTHER sweater KAL. ;) ROFL

Hehe...someone else with a red love! ;) Gorgeous yarns and needles! I'm such a Klutz I couldn't buy them.

Nice haul of reds! The jacked will look great with those buttons too!