I saw this on LadyLungDoc's blog, who saw it on Ruth's blog and borrowed the idea, which is to post a line or two from each blog month of the past year. It's funny how each random little snippet can take me back to a particular place in life and the issues or feelings, good or bad, I was dealing with at the time. It's a lot like when you pick up your knitting and instantly flash back to what you were doing/watching/listening to, the last time you were working on the project.

January 25, 2007
I posted a peek of this yarn the other day for Valkryie but can't resist a full frontal

March 12, 2007
Not to be upstaged, Cary does his imitation of a meerkat 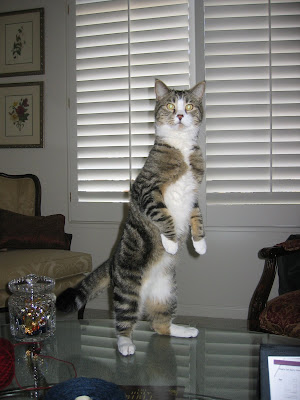 April 25, 2007
The seemingly endless saga of my dental woes continues and today was another round in the chair (only 1 shot on the pain-o-meter & 15 minutes of nitrous).

May 21, 2007
My favorite snacks while knitting at home are those that are easy to eat, like the Pepperidge Farm Goldfish Crackers pictured below. I can even lean over and suck one in like a little vacuum so as not to break my knitting stride or mess my fingers.

June 24, 2007
The night before we attended the luminaria Ceremony of Hope which kicks off with a group of survivors walking a lap lined with candlelit (or, in our case, glow sticks)luminarias; each one bearing the name in honor of cancer survivors or in memory of loved ones.

July 15, 2007
Ok, this is where I had planned to post my mystery stole update. But today, after hours and hours (did I say hours?) I finished Clue 3 and felt so good about it I took a few photographs. But after I loaded the photographs I noticed so many errors I wanted to cry. Silly huh? Well, I thought about just knitting on but I knew the mistakes would plague me forever so I ripped it off and tossed it in the garbage.

August 27, 2007
Our LYS is spending Wednesday nights this August knitting bears for the Mother Bear Project. This is a good reminder when I need to remember there are starving kitties in Iraq. (See Bezzie's post from ...)

Sept ? 2007
I signed up for a webring called Blogstalking 2: The Reawakening and, frankly I'm relieved since my blog was about to be awarded the Your Blog Sucks Girl Blogger award.

Oct 17, 007
Cpurl's Mom (while waiting for a table at a Japanese restaurant): What are you working on?Cpurl: It's a sleeve--see? (cpurl puts it on her wrist)Cpurl's Mom: "Won't that make you look bulky?"The truth hurts.

Nov 4, 2007
This has nothing to do with old photos, but a few weeks ago I was out with Muggle friends K & J and, I swear this is true, a happy face appeared in our pizza

Dec 15, 2007
So there you have it. I've suffered a fate equal to landing in an insane asylum or being homeless.
But, at the end of the movie, Clarence leave a note for George that says "Remember no (wo)man is a failure who has friends."
It this regard, I have indeed, a Wonderful Life.

Knitting wise, I'm too lazy to do a photo collage but here's my year's worth of knitted work:

Not as productive as I would have liked but more than I thought.

Next year's resolutions:
1.Get Healthy
2.Get Organized-clear out clutter
3.Participate in Project 365/52

I've even set up a blog to post my photos on a weekly basis: Cpurl's Project 365

I'm full of year end good intentions and I'm sure this is going to be harder to keep up with than I think , but I hope it will be a fun way to make sure I add a dose of creativity to every day. What I suspect is that I'll end up of 365 photos of yarn + cats.

I leave you with my favorite photos of the year:

Mika as a therapist: 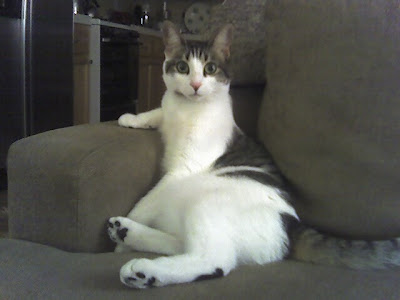 And a shot I took at Natural Dye class: 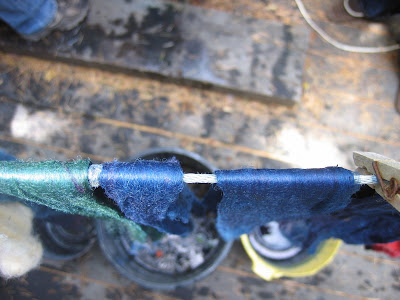 Your kitty pics always crack me up! Love that last dye shot, too.

Dye class was a lot of fun. I like your meercat the best of all.

It has been a good year-- full of great photos and entertaining blogging-- got me through some long work days....

Love that Mika as a therapist picture!! Fabulous!!

The meercat is one of my favorites of 2007! Thanks for posting that again.

The kitty shots are priceless. The Meercat pose is funny as all getout, and I honestly believe that cats are decent replacements for a therapist when one is needed but not available. How can you not feel a lot happier inside with a purring, fuzzy buddy curled up on your lap?

And that yarn you dyed... gorgeous.

Chunky just saw Cary and yelled "How can he do that?!"

Happy New Year. That picture of Mika still cracks me up.

I wish you well with all your projects. I hope when you post your look back at finished 2008 projects, my purse will be there. :)

Ooh I liked that blog in review post!
It is funny how you glance over and remember all the elements/feelings of that one moment in time.

I am still LOL @ the gold fish! Haha!

I can also recognize when I started to read your blog too! So glad I did!!

I look forward to more reads and knits from you in 2008!

BTW - That last shot is awesome!

I'm in love with your cat!

Wishing you lots of happiness for 2008. And lots of knitting time!!

I had a good laugh looking at these photos of your cats. You should make a calender of those guys. Happy New year to you sweetie.

Happy New Year and great blog review for 2007. I daren't try and think about FOs for 2007 - there are very few of them! Must try harder this year ;)