a dillydallyknitter: I is for Iron

I is for Iron

The Iron Horse Trail is a 23 mile trail converted from an old Southern Pacific Railroad right-of-way established in 1891 and abandoned in 1977. It's also part of a nationwide effort to convert old rail lines into trails. 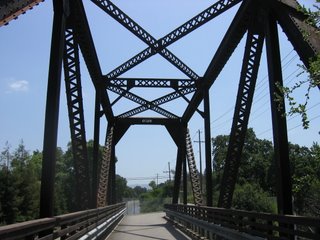 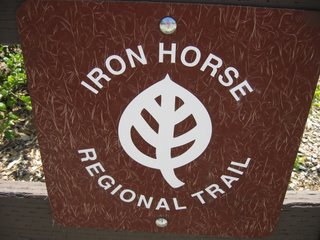 But the iron horse is nothing compared to the iron will of a knitter who baffled over a pattern but is determined to knit on. In my year of trying things new...I am learning to knit from a chart and am starting with something simple--an old Norah Gaughan pattern. Last night I was knitting along on the second line of the chart and came out 2 stitches off so, since it was late, I put the knitting down and went to sleep. Tonight, at knit club, my knitting buddy from *left coast knits and I tried to figure out what was going on, counting, re-counting and, I was about to give up, when I noticed the row in question (purl row) had two decreases printed on the chart that no other purl row had and, voila!, the two off stitches! Chart error, not user error!

It may not be as exciting as breaking the Da Vinci Code but it made me feel pretty smart.

I couldn't be a CCL without sneaking in another gratuitous cat photo so:

I is also for iris: 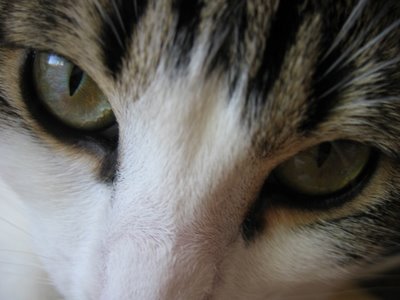 Nefertiti had nothing on Mika's eyeliner.

What a beautiful picture of Mika! The Ironhorse Trail is great. Too bad you can't knit and jog at the same time.

My husband and I used to occasionally ride bikes on the Iron Horse trail to get some exercise, but we would always just ride to Baskin Robbins (which is dangerously close to the Iron Horse Trail) and buy ice cream sundays.

Your kitty is adorable!

Nice kitty pr0n! hehe! Wow, that is cool, the Ironhorse trail, wish we had that. Great way to use a bit of history!

That is one pretty kitty! And the pic of the bridge is very cool, too!

And the cat close up is too cute!

The picture of Mika is gorgeous! Amazing eyes (and eyeliner)!

that is a gorgeous kitty pic!

How did you get the camera that close to the cat and not have it blink or feign sleep when you pressed the button? Seriously, Ripple won't let me do that. Hmmph.