You know you're off to a good work day when you get to work and have this: 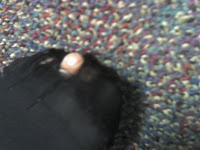 And the sad thing is that I'll probably go home, forget about the hole, wash the sock and put it on again. And when I do, it will be on a day I'm running late or out of clean dress socks and I'll end up wearing it again.

Over the weekend *LeftCoastKnitter (and yes, she finally updated her blog) came with me to cruise a few yarn shops under the guise of shopping for my Secret Pal. (You know, one for me, one for my SP, two for me, and maybe I'll keep this and give something else to my SP).

On the way there, the heavens decided to pour torrential rain down on us and my windshield wipers were in overdrive. "Focus woman, it's for YARN" Or at least that's what I think she said. Anyhoo, we made it to Purlescence (their yarn selection is getting even better and better. I wish I lived closer. Or in the back room). Commuknity and finally to Knit This, Purl That to sit and knit.

Last weekend, at Tricoter, I bought a couple of Noni bag patterns:
I want to make the shoulder bag for moi:

And my sister wants a tote (in black and grey stripes) without the flowers: 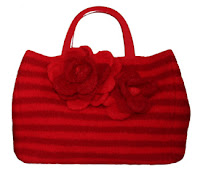 So while we were at Commuknity, I found a shade of brown in Cascade 220 in a colorway called, and I kid you not, Dyke Brown. LCK saw it too so I know it's not just me. We had no idea why this particular shade of brown would be so named but it's going to be the color of my new bag. They didn't have enough hanks there so I bought it at Knit This Purl That (where the color was just labeled with a number).

Back at home, I still was perplexed at the color name so I googled and discovered that the color is really called Vandyke brown. Vandyke brown is a "transparent brown pigment containing usually over 90% of organic matter" Euw. But that's not what we saw on the label I swear.

Saturday, I finished my Socktopia socks for April: 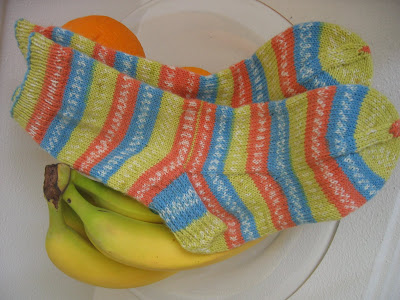 It's in the Orange You Glad I Didn't say Banana? theme. Knit in KnitPicks Simple Stripes I got 300 years ago in a swap with Turtlegirl and proof that I do occasionally knit from my stash.

Speaking of Turtlegirl, here's an orange kitty, WeeBee, who looks like he's crashed out after a drunken binge at a Frat party: 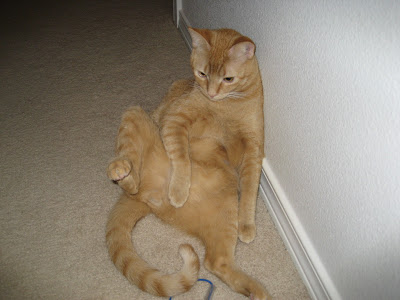 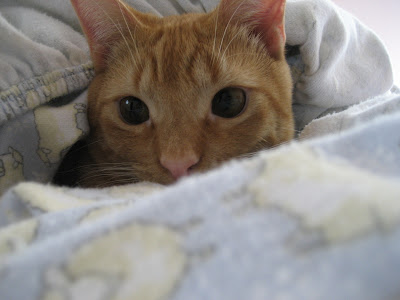 Oh wait. I didn't mean to imply that Turtlegirl has been seen crashed out after a drunken binge at a Frat party. It's just that she has cute orange kitties and my sister has a cute orange kitty and....oh well, nevermind.

Nice socks! And with a punch line Chunky loves!

I love the bag patterns. Those will be great.

I with a lady that came to work with two different shoes on one morning! She didn't notice until being at work for a couple of hours.

Though I have been caught passed out after a Halloween party in Maryland. Heh. Those socks came out awesome! And WeeBee - my God I thought it was Calvin at first!

Awww purlescence...be glad that they are not 15-20 minutes away (like they are for me). Too tempting!!! There should have been some blue moon left...I didn't buy it all the last time...just a few skeins :) Sounds like a fun day!!!

Eek! Well at least they aren't 2 different color socks! Sounds like a good yarn crawl there! Interesting color for your bag! ;)

Cute kitty and those socks are perfect for the theme, as well portrayed! :)

hehe, my bf's cat looked like that after we drenched the carpet teepee in spray catnip. must've been some party!

I love the bag patterns you chose, and especially the shoulder bag.

Wow - I'm impressed at how identical the two socks are - I never seem to get it that close. I had to snicker out oud at the one kitty pic (and now all my co-workers are wondering what is up with me...)

that is the funniest kitty picture.

i like both of the bags, but i am too cheap to pay for the noni patterns. i'm eager to see how yours turn out!

Heeee, your funny ..I love that you are knitting from your stash. Make me feel not so left out:)
I am dreaming though of the day I do purchase some really nice yarn for a sweater...one of these days or years.LOL

Noni bags are the cutest, especially with all the felted flowers on them!

You should have whipped out your double pointed needles and some left over sock yarn and knitted a little tiny toe hat!

Hi there from your Spring Fling Pal!
I adore your kitty photos!!! I've just boxes up your goodies, and I'm waiting for just one thing to arrive in the mail to add to this first box of knitty fun. :)