a dillydallyknitter: Saturday with a U.K. Flavour

Saturday with a U.K. Flavour

On Saturday morning I discoverd a new and charming knitting podcast out of London called Lixie Knits It and worked on my Roza's Socks while listening to her first two shows. I know we Americans are enamoured with British accents but she really has a lovely podcasting voice.

Later that afternoon, I took my Mum to a movie which happened to be "The Queen" and tried to work on the second sock but I'm not very good at knitting in the dark yet.

Saturday night I caught up on some shows I had stored up in Tivo, including the very funny "Extras" and finished up my socks.

The sock yarn used is Fyberspates made in Wales. 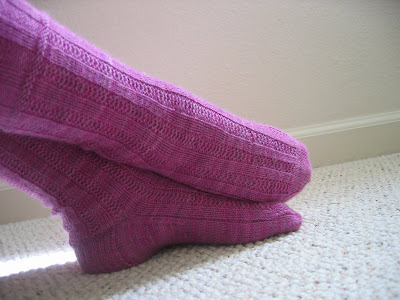 This pattern falls into an easy rhythem and is fun to knit. 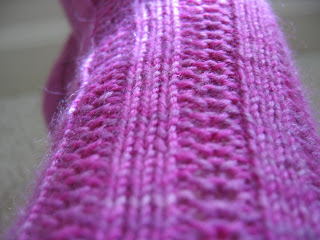 Details:
Pattern: Roza's Socks
Source: Interweave Knits Spring 2007
Yarn: Fyberspates 85%wool, 15% polymide
Colour: Pink & Mauve
Needles: 5 Brittany Birch US 1
Modifications: Worked pattern as written but if I knit this one again for myself I'll shorten the leg by an inch.

Lovely! the pattern looks great and such a pretty color.

Those came out beautifully and I love the color!

Sounds like a great weekend - and I really love your socks. :) Thanks for the tip on the podcast - I'll definitely check it out.

Glad you had such a great weekend! And productive, too...

Oh, I want to see that movie! I am in love with this color right now. You knit the prettiest socks and pair them with the perfect yarn.
Yummy!

Just gorgeous! I'll have a lot of tivo'd stuff to catch up on too! :)

Oh they turned out beautifully. It's such a pretty colour!

Beautiful socks! I love the bright color and the stitch definition.

Wow, and they're nearly the same color as the ones in the mag! Very pretty!

You've been an honourary Brit all week by the sounds of things. Those socks are incredibly pretty.