I'll be a little busy the next several days so I thought I'd do a 3-in one combo post. 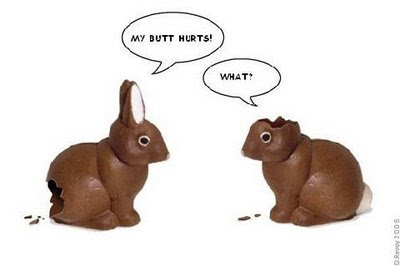 So, after battling the plague last week, I managed to complete a whopping THREE repeats of the pattern: 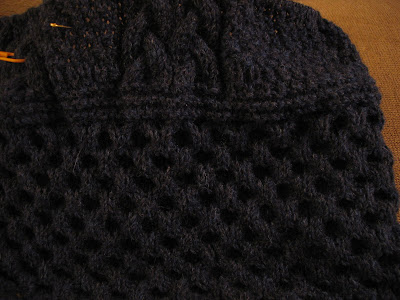 The pattern charts are separated into Chart A, B, C, etc. with moss stitch sections thrown in. I can't remember the sequence so I had to tag each section with a letter until I can read the knitting better. 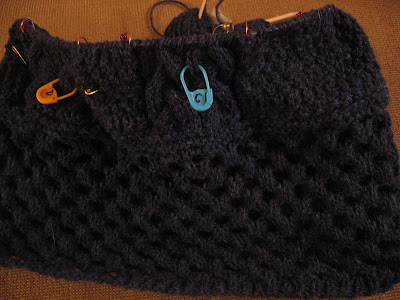 Dad Sock update: I finished one sock out of the Lorna's Laces Shepherd sport. He tried it on and this time, IT WAS TOO SHORT. GAH! But luckily I can fix it this time.

Yesterday an new LYS opened. Actually, the owner bought out the previous owner so it's a re-named and re-vamped LYS. The owner is quite nice and seems open to new ideas to make this a more community knitting store.

The new shop was re arranged and a sofa brought in so it's bright and cozy. The jury's still out on the yarn selection though. It looks like she's taken over the inventory of the previous shop but she manged to get a few skeins of Lornas Laces:

So, in support of shopping locally, I bought the Vera colorway because it reminds me of raspberry truffles.

I'm so sorry about the dad sock. May it fit next time! At least the width is right!

I like your 3-in-one post!!! I'd say that was some pretty ambitious knitting considering you were sick - bravo. And I love that LL colorway . . . if there's Lorna's Laces at the LYS there's hope for even more great things to come. Have a wonderful weekend and a Happy Easter!!

Oh...you made that look so droolworthy! Happy Spring, Happy Easter! Sweater is looking good!
Whew, glad the Dad Socks fit and all you have to do is lengthen! Did you write down your pattern, etc, so it'll be easier next time? Well...you know if there ever is one ;)

Happy Easter. Hope you have a great weekend. Love the LL!

All hail the Kerry Cardigan- mine is being a PITA too. When we finish them, we need to wear them together and swear a lot.

Lucky for you I did not see that LoLa colorway!!

The little cartoon crackes me up. The new Lorna's is beautiful!

The sweater is coming along great!

The bunnies are too funny and that lorna's looks delish!

Your cardigan is coming along beautifully. I like the idea of tagging the sections with the chart letter. It's going to be stunning when its done.