And...unless I knit like the wind over the next few days, my ONLY pair for this month. Work's been busy so the knitting time has been scarce but I'm happy with how this pair came out.

These socks are yet another example of the kindness of Knittyheads! The yarn was a RAK from the fabulous ZKnitter and the pattern was a sneak peek from the soon to be published, Soap Fiber Gal!

The pattern is called Scales Skin Socks (S.S.S) aka Snake Skin socks and has a picot edge cuff. 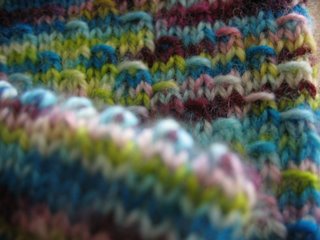 The yarn is Sunshine Yarns by Dani and in the Dragonfly colorway. 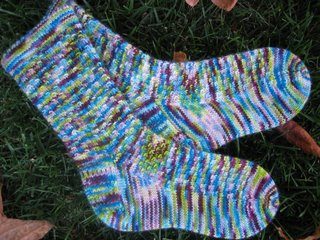 Cary wants to give a shout out to the St. Louis Cardinals for winning the World Series! Even tho' we're Oakland A's fans, Cary is grateful to the Cardinal's Manager, Tony La Russa, for co-founding the incredible ARF (Animal Rescue Foundation). 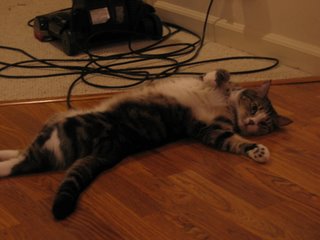 A few years ago Cary was on death row at a shelter somewhere in central California when he was saved by ARF volunteers. They took good care of him until the day he was adopted me 2.5 years ago. He's still a little shy from his life on the streets but has adjusted to his current life of sleeping in the sun, sitting in the window and stealing balls of yarn quite well.

Aw, that's pretty cool. I also love it when organizations come up with clever acronyms that fit what they do.

And thanks for the close up on that Snakes on a Sock from Zonda...I have been trying to replicate that design without having to joint that group, and I think I did it ;-)

All I can say is AWESOME!! Wow you gotta submit that picture to Dani for her gallery!! I know she'd love to see it! Fabulous colors in there..oh yeah, the sock is really great too!! ;) Yay for SSS's

Great work finishing this pair, I know it's been busy! At least you finished a "real" pair! this month!

Awww..forgot to say, Cary looks so cute! So glad you got him and became his Momma! :)

Cary is such a cutie.

My Maxy, who was also on death row, sends a high five to Cary.

Me - a shout out for those socks!

Great socks, but that catpr0n clinched the deal!

Cary looks so happy you adopted him - he's a lucky kitty.

Awesome socks! And yay for Arf! We love us some Cary on the Dilly Dally blog!

They look great! Glad the pattern was a success for you! ;o0

I may want o use one of your photots for the next book....with your concent of course

What great socks those are!! The colours and pattern go together very well, nice and cheerful. Cute cat!

Beautiful yarn and pattern combo! I love them both.

Great socks! That little kitty sure is cute -- so glad you adopted him. What a lucky guy!

Lovely socks, the colors are perfect for the S.S.S. pattern!